“I write when I’m inspired and I see to it that I’m inspired at nine o’clock every morning.”
~ Peter de Vries ~
Gifts for My Writer Friends:
Rick Riordan wrote a terrific post on getting published. You can find it HERE.
Have you ever wondered about what makes great writing? You might be surprised. Click HERE to find an excellent article on that topic.
Great stuff from Martina Boone at Adventures in YA Publishing on the old bugaboo of showing vs. telling. Click HERE to see it.
I have had a down and up weekend. Yesterday morning, I heard my sweet brother-in-law, George Docken, had finally lost his battle with Parkinson’s Disease after a very, very long fight. I will miss him very much as will anyone who knew him. That was the down. Today my grandson Gehrig played in his first Little League All-Star game for this season. He caught four innings and had two throw-downs at second for outs. Then he moved to third base. There he made a magnificent bare-handed catch and throw

to first for an out while on the run. His whole team played really, really well and beat a tough team 9-6. That was a tremendous up to end the weekend.

Speaking of baseball, last week I offered a copy of Screaming at the Ump by Audrey Vernick for one of you. I am happy to announce the winner this week is Joanne Fritz. Let’s hear it for Joanne!! WooHoo!! Joanne writes picture books and middle-grade novels and writes about this business at My Brain on Books which you can find HERE. I try to never miss it. I have another giveaway, so stay tuned. Joanne, I will be sending out Screaming at the Ump to you this week. I was doing some of my own screaming at the ump today. I don’t like it when the strike zone is different for the two teams. A woman came by selling tickets for a raffle. She announced they were raising money to send the umps to the Western Regionals. I must say, I feared for her life there for a minute. You don’t often here a raffle-ticket seller roundly booed at a baseball game!
Since I have had a ridiculously busy and somewhat stressful weekend — I also 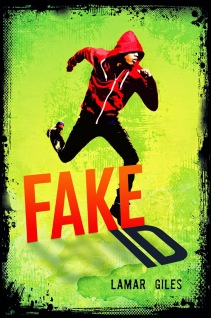 had a workshop on Saturday on revision and a critique group meeting today — I am going to post a review I wrote for the San Francisco Book Review a while back. It’s a terrific book and I never got around to reviewing it here. The book is Fake ID by Lamar Giles. Here is my review.

Being the new kid at school is never easy, but it can be particularly difficult in high school, especially when you’re busy learning a new identity. Nick Pearson is not the first identity he has had to learn. At least Nick seems to have made a friend at his new school, but it’s clear he has made some enemies as well. The family is in Witness Protection, and the guy Nick makes friends with, Eli, runs the school newspaper all by himself and happens to have the hottest girl in the school for a sister. Eli is a true investigative reporter and is about to blow the lid off the little town they live in and, Nick realizes, will blow his family’s cover at the same time. Before that can happen, though, Eli is dead. The official story is suicide, but Nick and Eli’s sister, Reyna, know it isn’t, and they intend to find out what happened and who did it. Terrible things start happening around them and to them. Eli is not the only one to die.

“Truth: growing up around the people I’d been around, being part of a family like mine, I used to think being dragged to a police station was cool—a rite of passage. I heard my dad’s friends tell jail stories like they were vacation memories.”

This debut novel by Lamar Giles is full of tension and mystery with lots of twists, turns, and dead ends.

I liked Fake ID a lot. It was really hard to put down. It should be very popular

with the middle-school crowd and those in high school. I have a gently-used ARC for one of you. All you need do is have a US address, be a follower or email subscriber (Let me know which and if you haven’t signed up yet, check the right-hand column. Free and easy. ), and leave a comment. Your name will go in a drawing. If you would like extra chances, spread the word about the giveaway by Tweeting or posting on Facebook or your own blog. Let me know what you have done, and I will give you extra chances.

Be sure to wander on over to Shannon Messenger’s Marvelous Middle-Grade Monday list for more reviews and maybe some giveaways there as well. Click HERE to make that journey.