“The ear is the only true writer and the only true reader.”
~ Robert Frost ~
Gifts for My Writer Friends:
The Editor’s Blog has a terrific post that will answer a LOT of questions about quotations and italics usage. Click HERE.
Since marketing is increasingly becoming the purview of authors, HERE is a site that is chock full of helpful information.
Writers Rumpus has 12 Tips for Effective Critiquing. Click HERE to read it.
This is a special edition of my blog because I couldn’t wait until the weekend to introduce Barbara Krasner‘s wonderful debut picture book, Goldie Takes a Stand: Golda Meir’s First Crusade, out this week from Kar-Ben Publishing. AND Barbara was kind enough to do an interview with me as well! Barbara runs one of the best blogs in the business — The Whole Megillah: The Writer’s Resource for Jewish-themed Story: Fiction, Nonfiction, and Poetry. If you have never visited, you really should. She has the best interviews of agents, editors, and writers I’ve ever seen and lots more besides. Click HERE to visit. 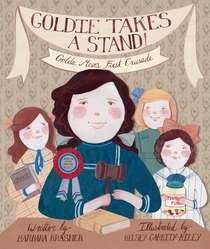 Most of us know who Golda Meir was and know about her leadership in Israel, but Barbara has found a very interesting story from Golda’s early life, then broke a bunch of picture book rules and told her story in first person from Golda’s point of view. We don’t see much in the way of historical fiction in the picture book market and it is even more rare for stories in the point of view seen here.
Goldie is nine years old, living in Milwaukee, when she forms the American Young Sisters Society made up of her young friends who are also Jewish immigrants from Russia. Of course, Golda is the president of the Society. The topic of the meeting is school textbooks. The girls and their friends in school are struggling to learn with tattered, out-of-date textbooks. Goldie said they would each need to raise 3 cents per week, but the girls knew it was too much. Golda tried charging people extra in their family store, but people objected. By the next meeting, no one had been able to raise much money. The girls had to think big and Goldie knew just what to do.
This charming story will capture young readers’ interest and leave them wanting to know more about this great lady. Of course, Barbara has added some interesting back matter about Golda Meir and places to find more information. Now, please join me for more fascinating information from Barbara Krasner.
I really enjoyed reading your new picture book, Goldie Takes a Stand! Golda Meir had many extraordinary accomplishments in her life. How did you happen upon this fascinating story from her childhood?
I had signed up to spend two weeks at Carolyn P. Yoder’s Alumni Retreat at the

Highlights Foundation at Boyds Mills, PA. The weekend between those two weeks were free, however, and I planned to attend the annual reading of the Moses Seixas and George Washington letters of religious tolerance at Touro Synagogue in Newport, Rhode Island. I perused the spines of books on the shelves in the farmhouse, the homestead of the founders of Highlights for Children magazine, and came across Golda Meir’s autobiography, My Life. I borrowed it for my trip.