Gifts for My Writer Friends:


Through the Tollbooth has a GREAT post on Creating Character Contradictions you can find HERE. This is one of the best posts I’ve read in a long time.
Writers Helping Writers have a guest post by M. J. Bush that should not be missed. Click HERE to find out How to Keep Your Story Moving and Your Character Believable.
I am becoming a big fan of Fiction University. This post is about how to use adverbs. Yes, how to use them. I know what Stephen King says, but click HEREfor an interesting take.
Last week, I offered a copy of Kelly Milner Hall‘s wonderful book, Ghostly Evidence. This week’s winner is Nancy! (Ahem. Not nancywrtr. Sorry.) WooHoo! Congratulations, Nancy. I will get this out to you this week. If you aren’t Nancy, stick around. I have another great giveaway this week.
When I saw some months ago that Jane Yolen had a new book,  A Plague of Unicorns, coming out, I lurked around the San Francisco Book Review until I got my hands on it. Then I asked if I could interview the author and do a featured review. I got the go ahead, and when I contacted Jane Yolen, she most graciously agreed. Here is that review and interview. Enjoy! 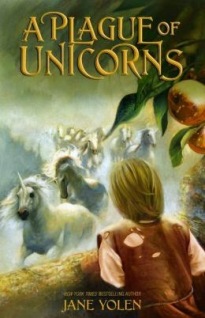 Young James has the most incredible curiosity, asking questions all day long of anyone whom he can convince to pause for a moment or two. He is neither disobedient nor disrespectful to his mother, Duchess Ann, or his Uncle Archibald, nor is he a bad big brother to baby Bruce nor an annoying little brother to sister Alexandria, but the questions are unending. All his tutors have resigned unceremoniously save Cumber, nicknamed “Cumbersome” by Alexandria, although “Tiresome” might have been more apropos. Perhaps if his father hadn’t been gone for so long, James would be more settled. When his ninth birthday comes around, Uncle Archibald announces it is time for James to be sent to live with the monks at Cranford Abbey and finish his education. It is three days ride away, and James is sure he will miss his home and family terribly.
When James arrives at the Abbey, he discovers the monks are all in a dither because they are being plagued by unicorns that eat their golden apples. These are not just any apples, but special golden apples for which the abbot has a cider recipe he believes will make enough money to save the crumbling abbey. You see, it is a very poor abbey. Abbot Aelian has tried to hire heroes to get rid of the unicorns, but to no avail. Is it possible that young James of Castle Callander is the hero for whom Abbot Aelian has been waiting?
Jane Yolen has written an absolutely enchanting story for the young middle-grade crowd. Both boys and girls will be charmed by the characters,

especially young James Callander, his sweet sister Alexandria, and the young oblates at the abbey. The story, set in a make-believe medieval village, will be of great interest to youngsters (and the rest of us who have sense enough to borrow this from the kids) as they lose themselves into a story of people a long, long time ago that is so different from the world they live in. This is the kind of fantasy all young people will like. There is little that is fantastical except the unicorns. This opens the readership up to everyone, not just those kids who are hooked on fantasy, yet enough to engage the fantasy readers. James is the perfect kind of protagonist for middle-grade readers. He is smart, curious, has a good heart, and perseveres through some very difficult times. In other words, he is a great role model for the younger set. There are plenty of funny moments and enough intrigue to keep kids turning the pages. Jane Yolen’s writing, of course, is absolutely lyrical and paints pictures in the minds of readers. That said, the beautiful cover art by John Rowe will draw young readers in, and the interior illustrations by Tom McGrath are a wonderful addition to the story, a story which is compelling and fun. This is a perfect book for holiday gift-giving or really for any time of the year.